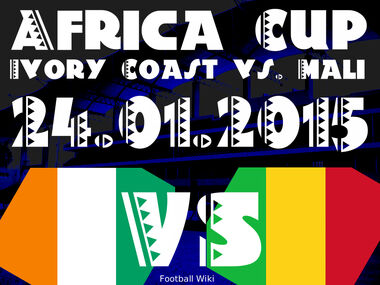 Will Ivory Coast be able to beat Mali tonight? That's the question and we can't give the answer until the match has ended. So far all teams in Group D has one point. All teams scored one goal in their first match.

Ivory Coast had to fight for that one point. Guinea, the first opponent, scored already in the first half of the match. And when Gervinho also gets a red card it's hard to make the equalizer. Also because Gervinho was the best man of the team till that moment. Luckily there was a good attack of Seydou Doumbia and Wilfried Bony. The first one mentioned made the goal in the 72nd minute.

Also Mali didn't have a really easy match. In the first 15 minutes they were the best, but Cameroon became better and better. Mali wasn't able to attack a lot anymore. However they scored the first goal of the match in the 71st minute. From that moment Cameroon really had to make a goal, since there would come more and more pressure on the team when they wouldn't win the first match against Mali. Luckily for Cameroon Oyongo made a goal.

Because of all these draws, Group D is currently the most interesting and exciting group to follow. All teams can still go to the knock out phase and therefore Ivory Coast vs. Mali is a really important match for both teams.

Go to the Africa Cup Hub for more about this amazing event.

Retrieved from "https://football.fandom.com/wiki/User_blog:2Actimv/Will_Ivory_Coast_be_able_to_beat_Mali%3F?oldid=108057"
Community content is available under CC-BY-SA unless otherwise noted.