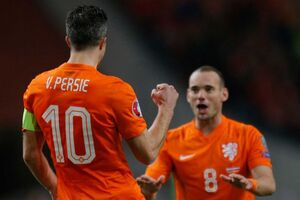 The Netherlands beated Latvia today. In total they scored 6 goals, evenly distributed over the two halfs.

Robin van Persie scored the first goal in the 5th minute already with a good header in the angle of the goal. Later Arjen Robben scored with a beautiful shot outside the area of the goalkeeper. The 3rd goal was made by Klaas-Jan Huntelaar with a smart shot from nearby the goalkeeper.

After the rest Jeffrey Bruma scored with a header from a corner. The next goal was made by Arjen Robben when he shot in the corner of the goal again. The last goal was from Klaas-Jan Huntelaar, also with a shot in the angle of the goal.

Latvia didn't have a lot of chances to score. They had some shots from a big distance and a header in the area of the goalkeeper. They got 2 corners in the whole match.

The Netherlands were playing good and had 74% ball possession. They (Ibrahim Afellay and Arjen Robben) also hit two times the woodwork and had a total of 25 attempts. They also had 680 pass attempts and completed 643 of them.

Retrieved from "https://football.fandom.com/wiki/User_blog:2Actimv/Netherlands_beats_Latvia?oldid=97297"
Community content is available under CC-BY-SA unless otherwise noted.