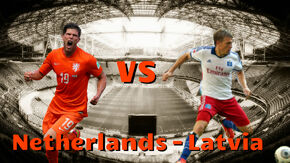 The Netherlands already had an enormous pressure to win matches, but since they lost the match against Mexico they really have to win against Latvia this Sunday.

Klaas-Jan Huntelaar started against Mexico; a lot people said Robin van Persie wasn't longer the best choice for the striker position. But he didn't score a goal. Now both strikers haven't really impressed, the national coach has a problem. A problem which can also provoke a new defeat, but now against Latvia.

Nobody expected The Netherlands would've so much trouble in their first matches. They're of course the expected winner of the group. They got bronze on the 2014 FIFA World Cup and won matches against teams like Brazil, Chile and Spain. Normally you would say it's easier to win the matches against the teams of the group than winning of the teams mentioned of the world cup.

Latvia haven't won any matches so far, though they had 2 times a draw. The Netherlands have only won one match against Kazakhstan up to now. It's now the time for both countries to get points to make a chance to qualify for the tournament in France.

Retrieved from "https://football.fandom.com/wiki/User_blog:2Actimv/Netherlands_-_Latvia_Match_Preview?oldid=97077"
Community content is available under CC-BY-SA unless otherwise noted.