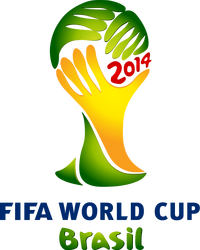 32 Teams. 1 Cup. 1 Goal. The whole world will be watching. The 2014 World Cup is coming soon! So all teams are qualified, but how good are they and do they have a chance to become World champions?

The following teams have been qualified:

Normally the Brazilian team will qualify easily for the next round. Croatia, Mexico and Cameroon have good teams, but Brazil has absolute top players like Neymar, Thiago Silva and Hulk. Which team will get the second rank in the group is hard to say. The three teams have all one or two really good players, but they have alse weaknesses, mostly the defending.

Obvious which two teams normally will reach the knock out phase of the tournament: Spain and The Netherlands. If there'll be a surpise that has to be Chile. They have some top players like Sanchez of FC Barcelona and Vidal of Juventus F.C.. However the Spanish and Dutch teams have more quality with players like Iniesta, Xavi, Sergio Ramos, Robben, Van Persie and Sneijder. Most people don't think Australia goes to the next around.

Hard to predict which two teams of this group will go to the next round. All teams have good attackers and a normal midfield with some star players. The weaknesses of nearly all teams is the defending, only Greece not. However Greece has also not the best attacker; Mitroglou. Colombia has Falcao, Ivory Coast have attackers like Drogba, Kalou, Bony and Ya Konan and Japan has some attackers who plays in England. The Japanese team has the best midfield, with players like Honda and Kagawa. We'll see which teams will reach the next round.

Three of the four teams in this group has a big chance to go further in the tournament. Not many people think Costa Rica will win enough matches to qualify. Uruguay, England and Italy have to fight to reach the next round. England and Italy have a good team with players like Rooney and Balotelli. But don't underestimate Uruguay; a team with some star players like Suarez, Cavani and Forlan. If Costa Rica wants to do something in this group they have to get a high chemistry.

One big surprise Switzerland was added to the highest pot in the final draw. Normally it's clear France will go to the next round. But to predict which team of Switzerland, Ecuador and Honduras will go further is hard. Ecuador has star player Valencia of Manchester United. Honduras has some players who plays in England and the players of the Swiss team plays usually in Germany and Italy.

One team goes for sure to the next round: Argentina. Bosnia Herzegovina, Iran and Nigeria are not the best opponents in the competition. Nigeria has an allround team; good goalkeeper, an allround defending, a good midfield and some good attackers. The team of Iran is one big mystery, most players plays somewhere in Asia. The players of the Bosnian squad plays in several top leagues. Bosnia Herzegovina and Nigeria are going to decide who is going to the next round with Argentina.

One of the most interesting groups in the competition. Normally Germany qualifies for the next round. But which team will be the second one? Portugal has a top team with Cristiano Ronaldo as the absolute star. However they don't play well against team who let them play the game. Ghana has some good attackkers and midfielders and the USA have a very good midfield and some good goalkeepers. These three teams have all a chance to reach the next round.

Belgium is the favourite in this group. They have a very good defending with players who plays all in top competitions. The midfield has also enough quality with players like Witsel and Fellaini. And of course the forwards; Lukaku, Benteke and Hazard are top players. Harder to predict is which team is the second one who qualifies. Nearly the whole team of Russia plays in the national league, the team of South Korea aswell. And the Algerian team has one top player: Feghouli.

The favourites for the cup are of course Brazil, Argentina, Spain and Germany. The whole teams have players of top competitions on every place in the field.

Outsiders for the cup are the teams of Belgium, France, The Netherlands, England and Italy. Most players in the teams plays in a good competition. But they all have weaknesses.

The FIFA World Cup begins on the 12th of June 2014 when Brazil kicks off against Croatia.

Retrieved from "https://football.fandom.com/wiki/User_blog:2Actimv/2014_FIFA_World_Cup:_An_Introduction_and_Analyse_of_the_Teams?oldid=23449"
Community content is available under CC-BY-SA unless otherwise noted.