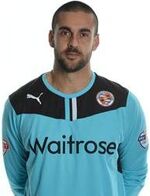 Adam Jay Federici (born 31 January 1985) is an Australian football (soccer) player who plays as a goalkeeper for Championship club Reading and the Australia national team.

Federici began his senior career at Wolverhampton Wanderers in 2003, but was only there briefly and soon switched to Torres. After a reasonably successful season for the Italian side, he joined Reading in 2005, and, following loan spells at Maidenhead United, Northwood and Carshalton Athletic, turned fully professional in 2006. A brief loan spell to Bristol City followed, before Federici made his Reading debut during the 2006–07 season. However, he was still unable to dislodge Marcus Hahnemann from the starting position, and remained second choice, even going on loan to Southend United in 2008. However, after this loan spell, an injury to Hahnemann gave Federici a prolonged run in the team, and he remained first choice for several seasons.

Retrieved from "https://football.fandom.com/wiki/Adam_Federici?oldid=183408"
Community content is available under CC-BY-SA unless otherwise noted.